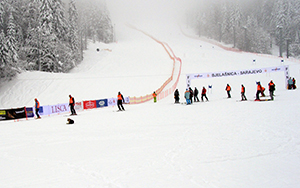 The international test of the Alpine Skiing race was held from February 19 to 20 at Bjelašnica. Considering that this race was the best test for holding EUROPE EUROPEAN CUP 2014, in which around 80 skiers and skiers from all over Europe will take part, MHS management decided to support this sport activity as an incentive for a better and better quality organization, but also development of winter sports in BiH. The organizer of the race is the Ski Federation of Bosnia and Herzegovina and KJP ZOI’84, while the technical organizer is the Ski Club ZOI’84. A sports event was opened by a member of the BiH Presidency, Željko Komšić, who is the president of the Organizing Committee of the race.